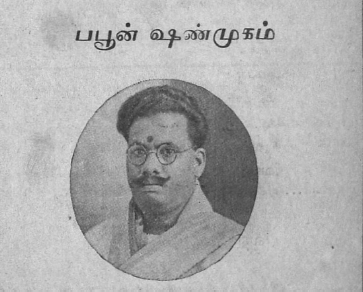 The ‘Buffoon Part’ was an integral part of Tamil theatre of yore, esp Special Drama.It basically was an act that brought in lighter moments to the plays that were otherwise heavy in melodrama.The Buffoon Part was either standalone (fillers in between scenes) or was woven into the story and was a much awaited segment of the performance. The actors who played these parts were given recognition on par with the lead roles and their names mentioned on the drama advertisements. One of the most famous Buffoon Part actors was Buffoon NS Shanmugam.

There is very little information about this theatre personality or his life. VK Ramasamy in his memoirs Enadhu Kalai Payanam however gives some interesting information on his theatre career.

According to VK Ramasamy, Buffoon Shanmugam’s heyday in theatre was between 1925 and 1940. Blessed with a wonderful voice, he was also a regular gramophone artiste, who recorded with the famous Broadcast Label of Surajmals. He forged a formidable partnership with the legendary ‘Raja Part’ actor of those times, SV Subbiah Bhagavathar and the duo were much sought-after for performances. Drama contractors would also cast Shanmugam in plays that had not so renowned actors by paying him a hefty sum, as his presence would boost the gate collections. Such was Shanmugam’s popularity that at a time when the ‘Raja Part’ actors were paid more than others, he insisted on being paid on par with them and also on being accorded the same facilities such as first-class train travel!

VK Ramasamy adds that Shanmugam had the notorious distinction of having been banned from performing in Chettinadu thanks to a song that he had recorded which slighted the honour of the ladies of the region. He was then forced to apologize publicly before being permitted to perform again!

Shanmugam also acted in movies such as Gnanasoundari, Subhadra Parinayam and Manonmani .

He certainly seems to have been one of the most colourful characters of Tamil theatre!